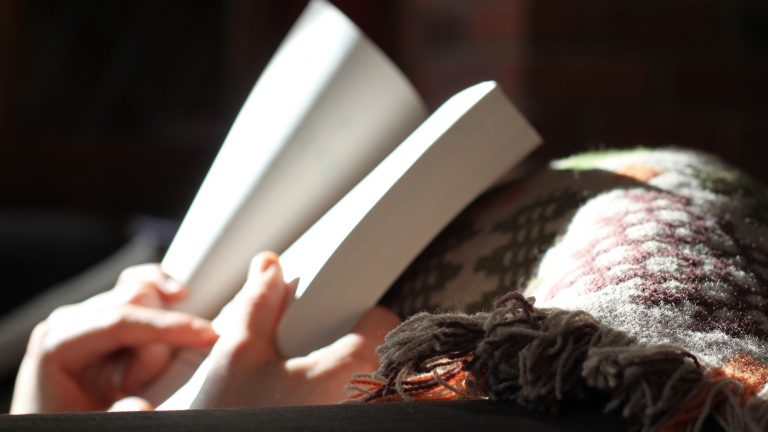 “The Comforter” by Ann Mainse

Thirty minutes had passed, and still no sign of it. Bedtime had come and gone for the five-man search party, who, after scouring every room in the house, had come up empty-handed. Oh, we found missing socks, dirty dishes, and mysterious candy wrappers, but the prize of our search still eluded us, and by now the whole family was completely exhausted. Everyone in the family, that is, except Eric.

To the average person, the object of our search was hardly worth the effort, but to our five-year-old son, it was a matter of utmost importance. You see, we were looking for Blankie, his flannel white blanket with pink bunnies on it, to be exact. Originally made as a baby gift for his older sister, this cozy receiver made its way through all of our children, finally finding true acceptance with Eric. For years, like Linus of Charlie Brown, Eric had displayed Blankie proudly, slinging it casually over one shoulder as if anticipating a sudden snuggle. And suddenly it was lost.

We probably could’ve replaced Blankie with any one of a dozen old worn baby blankets, but it just wouldn’t have been the same. For this was not merely an over-used, over-washed, and over-cuddled receiving blanket; it was a 3×3 piece of cotton comfort. It seemed to come with a built-in hug. The look of peace on Eric’s face when it was near was unmistakable, and at this point, there was no reason that it shouldn’t hold a prominent place in his life. And that’s just the way Eric liked it.

We all need a consistent source of comfort in our lives, and when you’re five years old, it happens to be made of flannel. Eric, unlike a lot of people, recognized that need and the importance of filling it… for himself, and for someone else.

“We have experienced true Peace, divine Comfort through the Spirit of God Himself.”

You see, that winter I was the first in our family to be bitten by the latest winter bug. Feeling extremely queasy, weak, and all around rotten, I very slowly went about my morning routine of preparing breakfast and packing lunches. Holding onto the counter like the side rail of a ship, I made my way through the swirling kitchen. It was while I was trying to put butter on the dancing piece of toast in front of me that I felt a little tug on my sleeve. I followed it to find my drowsy five year old in his Barney jammies, wearing one slipper (on the wrong foot), and a very unruly head of hair.

But as I looked into his big green eyes, I saw more than blanket marks and a sleepy yawn. I saw compassion. While everyone else had been dashing through the kitchen, launching lunch orders, and producing permission slips, Eric was just standing, watching his Mom. He watched my face turn pale at the sight of the breakfast I was making. He noticed the extra time I took leaning on the fridge door to steady my spinning head.

And then, our eyes locked. His gaze was thoughtful as he put his chubby little finger in the air and motioned for me to come closer. When I did, Eric did something that meant more to me than any amount of well-wishing cards ever could. As I bent down and put my face even with his, Eric slowly reached up and wrapped his Blankie around my shoulders. Then, with a crackling, sleepy voice he said, “There Mommy, now you’ll feel better.”

My heart melted as I realized the depth of his understanding. Eric gave to me the one thing he knew would bring me comfort. In making the connection between human need and the peace he had experienced, Eric discovered a gulf between the two. And in his own five-year-old way, he filled it. Without hesitation, Eric shared with another his treasure, his comforter.

Isn’t that what we’re all called to do? So many are living not unwell in body, but sick in spirit. They make their way through life with all the outward signs of a spiritual virus. If only we would notice. We have experienced true Peace, divine Comfort through the Spirit of God Himself. How much more should we want to share our Treasure with others, to reach out and wrap His love around their shoulders.

Just as Blankie was unashamedly a part of Eric’s every move, so desires His Spirit. He longs to instill within us the Power we lack to reach outside of ourselves, to shift our natural focus from self-living to self-giving. He yearns to complete us by loving us, teaching us, reaching out to others through us. Only then will we be able to, like Eric, share what we know to be true, the peace that we’ve found, the only genuine Comforter.

We finally did find Blankie that night and Eric fell asleep with it covering everything but his eyes. And as he slips gently from childhood into adulthood, it is my prayer that Blankie will be firmly replaced by the Comforter that will never wear out or be misplaced. The One that will always find him. And the look of peace on Eric’s face will this time come from a much deeper Source. Only then will he find true contentment – as he holds tightly to the One that sees Eric as His precious treasure.

Why Christians Should Be the Most Pro-Women