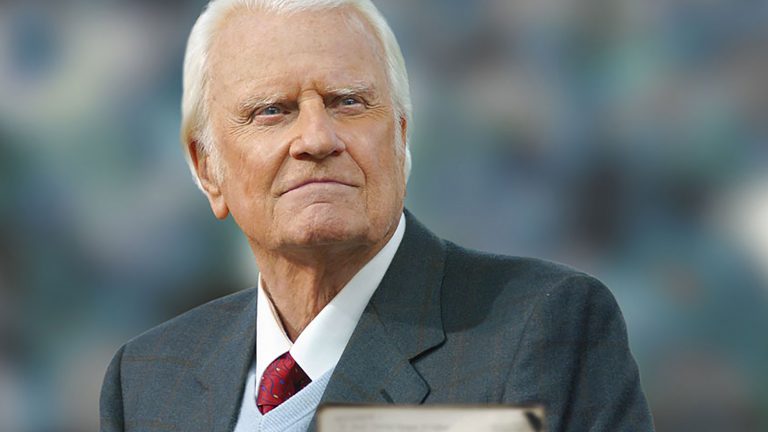 Billy Graham, one of the most influential preachers of the 21st century, passed away on Wednesday, February 21st in his North Carolina home at the age of 99. Graham had been battling a number of illnesses including prostate cancer, hydrocephalus and symptoms of Parkinson’s disease.

Billy Graham’s impact on the international Christian community cannot be understated. Over his 60-year career, it is estimated that Graham preached, in-person, to over 215-million people across 185 countries and territories by way of his various international crusades and tours.

He was instrumental in shaping the Christian media landscape. Beginning with the founding of the Billy Graham Evangelistic Association in 1950, Graham dedicated his life to spreading the Word of God through a variety of mediums. Hour of Decision, his weekly radio program, has been broadcast around the globe for over 50 years. He penned a syndicated newspaper column under the title “My Answer,” that is distributed across the United States through various local and national newspapers. His foundation’s magazine, “Decision” publishes 11 issues per year and is circulated globally. World Wide Pictures, Graham’s film distribution and production company, has produced and distributed over 130 films worldwide.

“His life, lived for Christ, was a witness to the world of a man fully consecrated to the calling of the Father.” –  Don Millar, JOY Radio

Graham was no stranger to the world of politics either. Throughout his life, he maintained a close relationship with America’s highest office, building and maintaining strong bonds with incoming and outgoing Presidents regardless of party affiliations. Over the years, Billy Graham would act as a spiritual advisor to countless American Presidents including, but not limited to, Dwight D. Eisenhower, Lyndon B. Johnson, Richard Nixon and Barrack Obama.

In response to Billy Graham’s passing, Dr. Jerry A. Johnson, President and CEO of the National Religious Broadcasters (NRB) association said, “The world has lost a great man, but those in Heaven are surely rejoicing in the homecoming of this good and faithful servant. Only God knows how many are there with him because of his ministry and how many more there will be. It seems trite to say he was a giant among men, but no one could doubt the truth of this statement.”

As Program Director for Canadian Christian radio broadcaster JOY Radio, Don Millar has followed Graham’s lengthy career closely. Here’s what he had to say about the impact of Billy Graham’ life and passing:

“Billy Graham is now where he longed to be. In Glory, surrounded by the countless millions of souls who are there, having responded to the gospel preached by him. His life, lived for Christ, was a witness to the world of a man fully consecrated to the calling of the Father. Billy was a man who will long be remembered for his zeal for the Kingdom and a burden to reach the lost. His books, crusades, radio and television programs were marked as milestones in the journey of almost every Christian in the world today. I and countless others will miss him but we are confident that we will see him again in ‘that sweet by and by.”

Born William Franklin Graham Jr. on November 7, 1918, in Charlotte, North Carolina, Billy Graham spent his formative years as a member of the Associate Reformed Presbyterian Church. He enjoyed a rural childhood on a dairy farm alongside his parents and his three younger siblings. While enrolled as a student at the Florida Bible Institute, Graham preached his very first sermon at Bostwick Baptist Church in Florida in 1937.

Graham was a staunch opponent to segregation and an ally to the American civil-rights movement of the 1950’s and beyond, enjoying a close, if not tumultuous relationship, with Civil Rights Leader, Martin Luther King Jr. “There is no scriptural basis for segregation,” Graham once said. “The ground at the foot of the cross is level, and it touches my heart when I see whites standing shoulder to shoulder with blacks at the cross.”

Billy Graham is survived by his 6 children, Virginia, Anne, Ruth, William, Nelson and Franklin. Franklin Graham followed his father’s lead as the CEO of the Billy Graham Evangelistic Association in 2000 and later it’s president in 2002. The Association continues to proclaim the Gospel of Jesus Christ and grow the faith of others domestically and around the world.

How to be Grateful When Life Sucks

How to Combat Loneliness During COVID-19