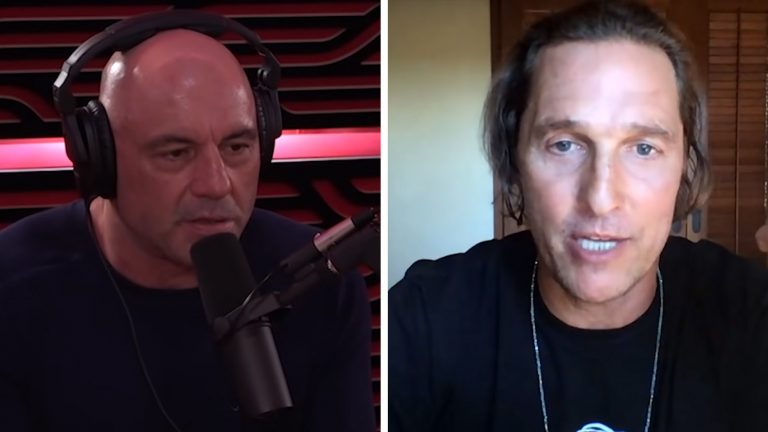 From Dazed and Confused to Interstellar speaker of truth, Hollywood star Matthew McConaughey has been making the rounds promoting his new memoir, Greenlights, and opening up about his faith, values and perspective on life.

Most noteworthy was the Academy Award®-winning actor’s recent appearance on The Joe Rogan Experience podcast. The two-hour conversation covered a wide range of topics, everything from the benefits of living in Austin, Texas to the dangers of finding your value from social media.

The conversation turns to faith about an hour in with Rogan asking McConaughey if he is “religious in some way.”

McConaughey helped define spirituality and religion before responding simply, “Yes, I am religious.”

He then expanded on how he has never seen science and belief as contradictory, and he specifically chose his role in Contact because he wanted to play a person who was a believer in a world of science.

“Science is the practical pursuit of God,” he said. “The two are not exclusive.”

McConaughey also acknowledged not every Christian working in Hollywood shares the same sense of freedom to be open about their faith. He described times where he received an award and in his speech he thanked God. In these moments, he has seen friends and fellow Christians begin applauding but then stop short after looking around and noticing others not clapping. McConaughey explained people are concerned they may lose their job or not get chosen for a role because of their religious beliefs.

His Dallas Buyers Club acceptance speech comes to mind, winning the award for best actor in 2014.

In the interview, McConaughey shared, “To illegitimize someone because they say they’re a believer is just so arrogant, and in some ways hypocritical to me.”

He also talked about the toxicity of Hollywood culture and how it can lead vulnerable people down harmful paths. He said he was able to resist this culture because he had a strong sense of who he was when he started acting, as well as who he was not.

Although he has faced some opposition in his career, McConaughey said, for the most part, he has drawn his own path. He credits this steadfastness due to his life philosophy, which is drawn from principles in the Bible like the Golden Rule and Proverbs. He explains his approach to living life with greater satisfaction in Greenlights, which is described as an unconventional memoir and already a New York Times Bestseller.

“I found a reliable theme, an approach to living that gave me more satisfaction”

The book’s title is McConaughey’s life philosophy. He explains how using rejections and setbacks as cues and nudges towards course correction leads to life’s greenlights.

For 35 years, McConaughey has kept journals and notes about his experiences and feelings. When he read through the collection of poems, prayers and musings about his beliefs he found a story he wanted to tell the world.

“I found a reliable theme, an approach to living that gave me more satisfaction, at the time, and still: If you know how, and when, to deal with life’s challenges—how to get relative with the inevitable—you can enjoy a state of success I call ‘catching greenlights.’”

Over a period of two months while in self-imposed quarantine, McConaughey used his journals to write the memoir, describing it as a love letter to life as well as an album, record and story of his life so far.

“It’s also a guide to catching more greenlights—and to realizing that the yellows and reds eventually turn green, too.”

Born November 4, 1969, McConaughey gained attention for his breakout role in the 1993 comedy Dazed and Confused. He acted in a wide variety of roles including comedies, thrillers and science fiction films continuously until 2009, when he took a two-year break. When he returned to acting in 2011 he began taking more dramatic roles, including his Oscar-winning performance where he played a cowboy diagnosed with AIDS in Dallas Buyers Club.

In the Joe Rogan Experience interview, McConaughey said he now chooses roles based on the pedigree of the people working on the film, and the script. However the main thing he looks at is choosing characters that “make me shake in my boots the right way…. That good kind of scared.” He said he selects roles where he can go as deep and as high as he wants to.

“I like characters where the decisions are really going to cost them. Where there are consequences with every single scene that they’re in.”

Since 2012, McConaughey has been married to Camila Alves. The couple lives in Austin, Texas and has three children, two sons and a daughter.