Carl Lentz and Emmanuel Acho Have an Uncomfortable Conversation About Racism 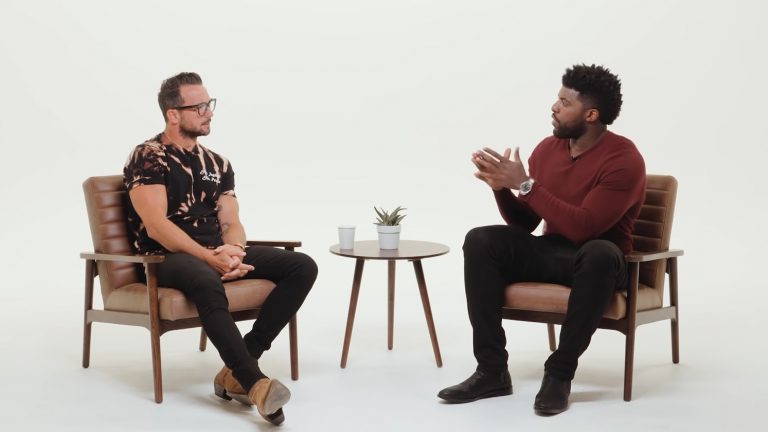 Why does the American white church seem silent on the issues of racism so prevalent in American society? What’s the role religion plays in fuelling or quelling racism? Is there a prescription to systemic racism?

Carl Lentz, lead pastor of Hillsong Church NYC, joined host Emmanuel Acho to address these topics and more in the seventh episode of Uncomfortable Conversations with a Black Man called, “Race vs Religion.”

Acho opens the episode saying, “Now, historically speaking the most powerful person in America is a religious white man. Well, more specifically the Christian, or should I say ‘Christian,’ white man.”

The candid conversation between Lentz, whose church has more than 9,000 members, and Acho, who announced in June he will join Fox Sports to co-host the afternoon studio show “Speak for Yourself,” has been viewed more than 200,000 times. It covers difficult subject matter including a retracing of the progression of Black oppression in America by the white church, first as participants, then as complicit and now as largely silent on the issue.

Why does the American white church seem silent on the issues of racism so prevalent in American society?

When the topic broaches, Lentz compares racism and prejudice in the church to having a messy home. It’s easy to start cleaning, he explains, but then become discouraged and decide it’s too much work—because the mess is woven through the house at every level.

“It could be said that churches might be one of the biggest propagators of racist ideology in our country,” he said.

Halfway through the conversation, Lentz asks Acho a clarifying question. “As a Black man who loves Jesus and you are trying to understand church, what do you need to hear from pastors…. What would give you peace to know that there is hope on the horizon?”

“The first thing I need to hear is something,” Acho answered.

“It took a Black person getting murdered on camera by an officer with his knee on his neck to finally wake people up,” Acho said.

What is the role religion plays in fuelling or quelling racism?

The key question Acho poses when discussing what a Christian’s role in quelling racism was, “If Jesus was walking the earth, would he be marching? Would he be posting the black square on Instagram?”

“There’s no question. Look at the New Testament and that will tell you where Jesus would be in this situation,” said Lantz. “Jesus is where hurting people are.”

Near the end of the conversation, Acho refers to the Parable of the Good Samaritan from Luke 10:25-37. This is the story about a traveller who is beaten and left for dead on the side of the road. A priest, then a Levite passes by the scene—but both avoid the injured man. Then, a Samaritan comes by and helps the traveller. Jesus told this parable in response to the question, “Who is my neighbour?”

The question he encourages viewers to ask themselves is, “If I don’t help the oppressed, what will happen to them?”

Is there a prescription to systemic racism?

Some of the practical changes he is making is having difficult conversations with his children and calling out instances of racism and oppression whenever he sees it in daily life.

“I would rather have someone explain to their children their messy transformation than wait till they’re complete because we’re just not going to be complete,” he said.

To the white Christian believer in America, Lentz has these parting words. “Don’t be intimidated, and do not minimize what you have….  You can do more than you think.”

“We know we serve a God that uses small things and turns it into more. And I think there are a lot more good people out there who want to help but feel overwhelmed. I would say, don’t buy that lie. The hope of the world is the individual that cares.”

The whole conversation is well worth the watch.

How to Practice Active Waiting