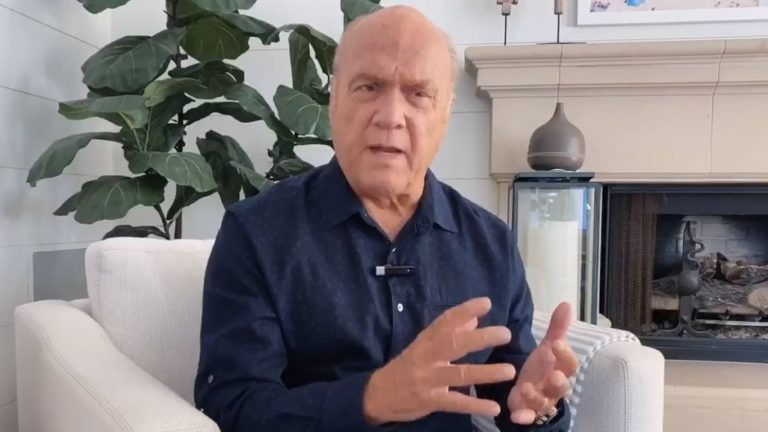 On October 5, Greg Laurie, pastor of Harvest Christian Fellowship in Riverside, California, announced he has coronavirus.

“I tested positive for COVID-19 last Friday. I have been in quarantine since then,” he said in a statement. “My symptoms have been mild so far, and I expect to make a full recovery.”

Laurie is one of at least 12 people who have tested positive for the virus, after attending the Supreme Court nomination ceremony at the White House on September 26. Others include President Donald Trump, First Lady Melania Trump and University of Notre Dame President John Jenkins.

The outdoor event, now being called a “super spreader” of the coronavirus, has become even more politically charged. The ceremony to announce Trump’s nomination of Judge Amy Coney Barrett to replace the late Justice Ruth Bader Ginsburg on the Supreme Court was attended by 200 people. Many in attendance did not observe social distancing guidelines or wear masks or other personal protective equipment.

I just wish that at times like this we could not politicize something like this and show compassion to people that are struggling with this. It’s real. It really is a pandemic that has swept our nation and even the world. I mean if the President of the United States can get it, obviously anybody can get it.

At the moment, Laurie is quarantining in his home following his doctor’s recommendation. His primary symptoms include a shifted sense of taste and boredom.

“It’s important as Christians for us to be reminded that God’s in control of our lives,” he said. “I don’t know why He allowed me to get it, but I got it. And I know He’ll get me through it as He always has been faithful to me in the past.”

Laurie finished his video message thanking people for their concerns and their prayers.

Praying for our leaders

In the New Testament, the Apostle Paul instructs Christians to pray for everyone, including our leaders.

I urge you, first of all, to pray for all people. Ask God to help them; intercede on their behalf, and give thanks for them. Pray this way for kings and all who are in authority so that we can live peaceful and quiet lives marked by godliness and dignity.

As the world becomes ever more divided over issues like the pandemic and the upcoming United States election, our natural tendencies can be to celebrate when an opponent is weakened, rather than lift them up in prayer.

As Christians, we’re taught to respect those in authority even if we don’t like them or agree with their policies. The Old Testament has many examples to draw this lesson from (think of Joseph’s experiences in Genesis 39-41, or Nehemiah’s story in the book of Nehemiah) and the New Testament backs it up.

One of the most explicit examples of this is from Mark 12, when a group of corrupt religious leaders tried to trick Jesus into speaking against the Roman government so they could arrest him.

“Teacher,” they said, “we know how honest you are. You are impartial and don’t play favorites. You teach the way of God truthfully. Now tell us—is it right to pay taxes to Caesar or not? Should we pay them, or shouldn’t we?”

For context, people who avoided paying taxes faced strict penalties in those days but many Jewish people despised paying taxes because it supported their oppressors. This was a trick question because if Jesus answered “yes,” it implied he supported Rome. If He answered “no,” then he would be accused of treason and rebellion against Rome.

So, how did he respond?

Jesus saw through their hypocrisy and said, “Why are you trying to trap me? Show me a Roman coin, and I’ll tell you.” When they handed it to him, he asked, “Whose picture and title are stamped on it?”

His reply completely amazed them.

When we’re tempted to go against our earthly leaders, or feel like cheering when those we disagree with are taken down a notch or two, it’s important to keep our higher calling in mind.

For we are not fighting against flesh-and-blood enemies, but against evil rulers and authorities of the unseen world, against mighty powers in this dark world, and against evil spirits in the heavenly places.

How to pray for those we disagree with

Whether they’re government leaders or people who have opposing points of view in our social media feeds, we’re to pray for all people.

Here are a few suggestions for ways to pray for those we disagree with.

Justin Bieber and Chance the Rapper Get ‘Holy’ in New Video

Bethel Music’s New Single “Be Alright” is Dedicated to 2020