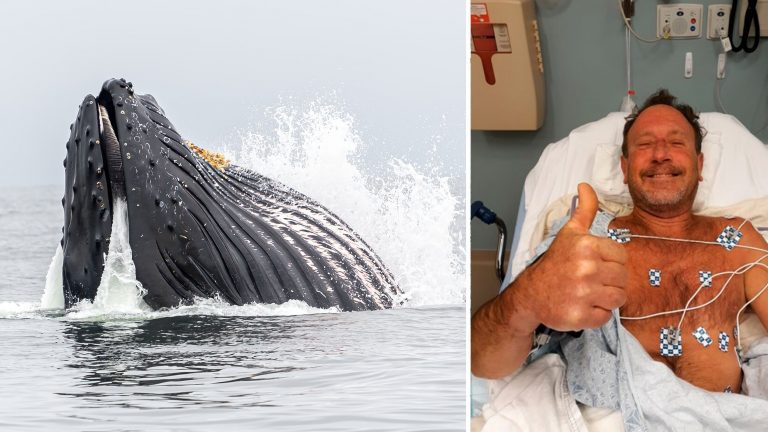 It’s a story of biblical proportions. On June 11, 2021, Michael Packard, a commercial lobster diver, was on his second dive of the day when he was swallowed by a humpback whale.

The Cape Cod Times reported the 56-year-old veteran diver was inside of the whale’s mouth for between 30 to 40 seconds before the whale breached, shook its head and spit Packard out.

At first, Packard said he thought he was inside a great white shark, but realized it was a whale after feeling around the darkness and not finding teeth.

“Thank God, it wasn’t a white shark. He sees them all the time out there,” said Packard’s sister Cynthia Packard. She reported Packard’s crewman Josiah Mayo had seen the whale fling her brother into the sea after noticing some action at the top of the water.

Mayo rescued Packard and then radioed the shore and returned to the pier. Packard was taken to hospital in a waiting ambulance suffering from a dislocated knee and soft tissue damage.

This unusual ocean encounter is being called a modern-day Jonah and the Whale story, which has brought the Old Testament lore and the possibility of being swallowed by a whale back into mainstream debate.

There have been other recent stories of people getting too close to comfort with humpback whales. In 2020, kayakers in California were caught in a whale’s mouth as it was feeding and in 2019, a tour operator in South Africa had a similar experience.

In general, humpback whales are not aggressive. They have baleen instead of teeth and feed on krill and small fish by straining large amounts of ocean water through their baleen like a sieve. Their throats can stretch to about 15 inches in diameter, so it would be difficult for a humpback whale to actually swallow a human being.

However, sperm whales are a different story. Their throats are large enough to feasibly fit a human and they’ve been known to swallow colossal squid, which can measure more than 30 feet long and weigh more than 1,000 pounds.

There’s a famous story about James Bartley, who lived from 1870 to 1909. The story says he was swallowed by a sperm whale and found several days later alive. He was discovered inside the whale’s stomach, after it had been killed with a harpoon and cut open. The story was first published anonymously in a newspaper and went viral across America. Over the years, this tale has been investigated many times and is largely thought to be false. And yet, no one knows for sure.

Jonah and the whale

In the Bible, the book of Jonah is set between 786 and 746 BC. It tells the story of the prophet Jonah who was given a mission by God. His quest? Announce the impending destruction to the people living in the city of Nineveh.

But Jonah didn’t want to. In fact, he “got up and went in the opposite direction to get away from the LORD,” (Jonah 1:3). He booked passage on a ship thinking if he sailed far enough, he’d be in the clear.

After a series of horrible events culminating in a devastating storm, Jonah realized God was with him on the ship—he hadn’t escaped at all. And now, it looked like God was going to sink the vessel and kill everyone on it because of Jonah’s disobedience. He told the sailors to throw him overboard in a last-ditch attempt to do the right thing. They did. The storm stopped. And then something even more incredible happened.

“Now the Lord had arranged for a great fish to swallow Jonah. And Jonah was inside the fish for three days and three nights.”

While he was in the great fish, Jonah had a change of heart and recommitted himself to God’s purposes. The animal eventually spit Jonah out onto the shore and he travelled to Nineveh to complete his mission. It’s an incredible story and if you haven’t read it for a while, take this opportunity to read through the short book and marvel at God’s creativity and compassion for us.

Now, was Jonah inside a whale? It’s difficult to say for sure. But Michael Packard was, and he lived to tell the tale.