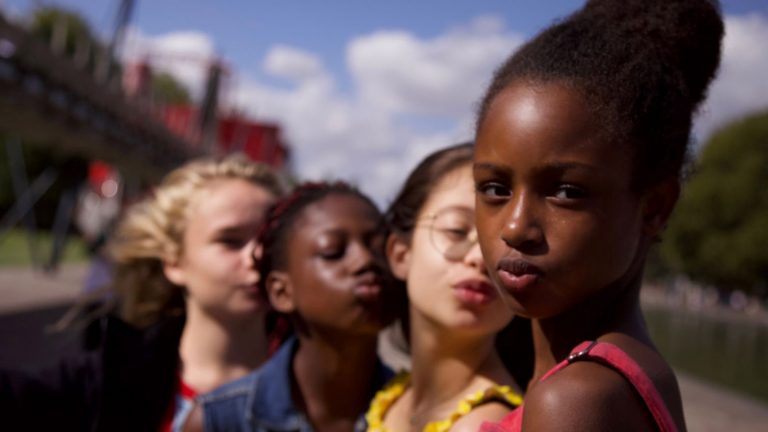 Since its September 9 release on Netflix, the film Cuties has been the epicenter of a fraught debate about where the line is between drawing attention to the sexual exploitation of children and actually sexually exploiting children.

#CancelNetflix began upon the film’s release, and has continued trending on Twitter as subscribers post screenshots of their cancelled memberships. Several petitions calling for Netflix to remove the controversial film have collected hundreds of thousands of signatures individually.

Although it’s early days, the campaign is having an impact. Variety reported cancellation rates were eight times higher on September 12, 2020 than average daily levels. Stock prices also dropped over the weekend and have continued to dip towards mid-August 2020 numbers.

Ahead of the Netflix release, Cuties was already embroiled in controversy over the movie’s promotional artwork. It depicted young girls posing in dance costumes, which many people felt was sexual in nature. This artwork was different than the film’s original poster, which shows four children walking happily down a street.

Netflix apologized for the inappropriate poster and changed the image and movie description.

The award-winning independent French film, originally titled Mignonnes, has a 91% rating from critics on Rotten Tomatoes, a jarring juxtaposition when compared to the 12% audience score.

This contrast is also reflected in the movie’s reviews.

Film critics rate the film as, “a thoughtful look at the intricacies of girlhood in the modern age,” and Netflix calls Cuties “a social commentary against the sexualization of young children.”

However, advocacy groups like the Parents Television Council (PTC) criticize Cuties for going too far.

“Although the film tackles an important topic—one that under different circumstances we might even applaud—it’s the WAY the film goes about it that’s problematic,” wrote Melissa Henson in her review for PTC. “This film could have been a powerful rebuke of popular culture that sexualizes children and robs them of their innocence. But these young actresses were sexualized in the making of this movie… And NONE of this was necessary to show to critique the sexualization of children.”

Lisa Nealon, director of corporate and strategic initiatives for The National Center on Sexual Exploitation also released a statement calling for Netflix to stop providing a platform to film that has sexually exploited children.

“While we commend director Maïmouna Doucouré for exposing the very real threats to young girls having unfettered access to social media and the internet, we cannot condone the hyper-sexualization and exploitation of the young actresses themselves in order to make her point.”

Child sexual exploitation happens when a young person is given things such as drugs, money or affection in exchange for performing sexual acts. Because the child is innocent or naive, they can be tricked into trusting their abuser or not understand that it’s wrong. This can lead to violence and even trafficking.

To learn more about child sexual exploitation and how to report it, visit:

In an interview titled Why I Made Cuties, director Maïmouna Doucouré explains how she recreated the main character based on who she was at that age, growing up in two opposing cultures and looking for her place in the world. She said her film is a mural of Western society, difficult to look at and accept but still true.

“Our girls see that the more a woman is overly sexualized on social media, the more she’s successful. And the children just imitate what they see, trying to achieve the same result without understanding the meaning. Yeah, it’s dangerous.”

Staring Fathia Youssouf, Médina El Aidi-Azouni and Esther Gohourou, Cuties is about 11-year-old Amy who starts to rebel against her conservative family’s traditions when she becomes fascinated with a free-spirited dance crew.