Popular Fleetwood Mac Song Back On The Charts After Viral Video 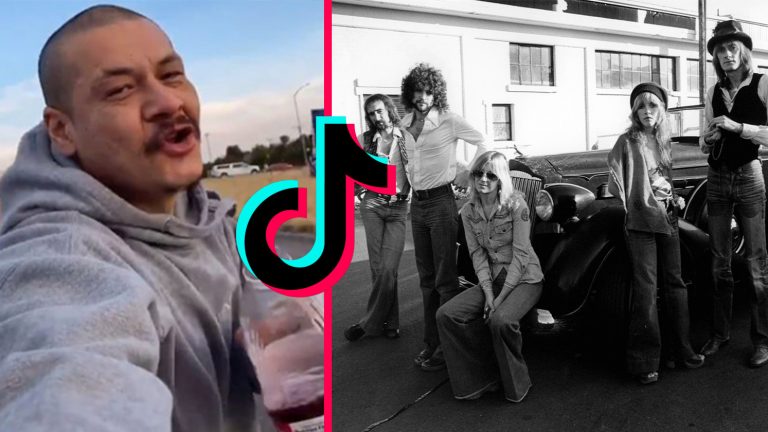 Living with faith in today’s culture can often be surprising, but now a viral meme is bringing back a classic hit in some seriously unexpected ways.

After 43 years, Fleetwood Mac’s single “Dreams” re-entered the Billboard Hot 100 thanks to a new TikTok trend.

This week, the former No. 1 single from 1977 reached 21 on the Billboard Hot 100 while simultaneously hitting No. 18 on the Streaming Songs chart and No. 3 on Digital Songs Sales by collecting 13.4 million streams and 22,000 downloads.

In addition, “Dreams” and its album Rumours has re-entered the UK charts and the Canadian Hot 100. “Dreams” is also charting on Spotify and Apple Music in some countries.

On September 25, 2020, TikTok user Nathan Apodaca (handle: 420doggface208) recorded himself skateboarding down the road while taking swigs from a 1.89 litre of cran-apple juice and lip-syncing to “Dreams.”

Captioned “morning vibe,” the video went viral and since its creation has gathered 9.2 million views. The video has also resulted in recreations from Fleetwood Mac band members Mick Fleetwood and Stevie Nicks.

People are calling Apodaca’s casual clip as “a whole vibe,” and there really is something mesmerizing about the 25-second clip. But what is it, exactly? The groovy soft rock, the casual swigs of Ocean Spray, the smooth movement from the skateboard rolling swiftly down the highway…

Fleetwood Mac is here for it

Mick Fleetwood’s TikTock recreation does a good job of capturing this elusive vibe. Added on October 4 with the caption, “@420doggface208 had it right. Dreams and Cranberry just hits different,” his video has 2.1 million views.

On October 14, lead singer Stevie Nicks added her own version of the viral hit to TikTok, lacing up roller skates while sitting on a piano bench (besides an open container of cran-apple juice of course) while singing along to “Dreams.” Just one day later the video already has 3.5 million views.

In March 1977, “Dreams” was released as a single from the album Rumours, Fleetwood Mac’s 11th studio album. It reached No. 1 of the Billboard Hot 100 as well as the top spot on many other charts.

Nicks is reported to have written the top track in about 10 minutes, after finding an inspiring drum pattern on her keyboard.

This 2020 resurgence isn’t the only time the hit single has re-entered the mainstream music scene.

In 2011, the single made UK charts and the album charted on the Billboard 200 after being featured on an episode of Glee. Titled “Rumours,” the popular television show paid tribute to Fleetwood Mac by performing songs from the album.

After a viral tweet in 2018, the song re-entered the Billboard Hot Rock Songs, reaching No. 14, and also made charts in New Zealand and Ireland.

Over the years members came and went and in 1974, Mick Fleetwood met Lindsey Buckingham and Stevie Nicks who were, at the time, a folk-rock duo. Soon after they joined Fleetwood Mac and the band transitioned from blues to pop-rock.

Although members continue coming and going, the band remains in one shape or form to this day. Fleetwood Mac is one of the world’s bestselling bands, selling more than 120 million records worldwide. This latest resurgence only further cements the band as pop culture icons.

Who could have guessed a TikTok user taking a selfie video while skateboarding, drinking Ocean Spray Cran-Raspberry juice and lip-syncing “Dreams,” by Fleetwood Mac would have resulted in so much goodness?

No one would have guessed. But here we are.