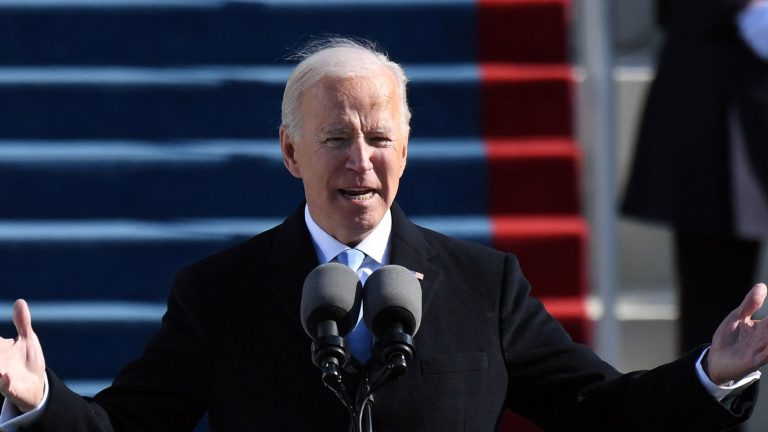 The world watched as Joe Biden was inaugurated on January 20, 2021 becoming the 46th president of the United States. In his inaugural address, he reiterated the challenges the nation faces in the near future, and urged Americans to be unified.

“On this January day, my whole soul is in this, bringing America together, uniting our people, uniting our nation, and I ask every American to join me in this cause.”

The pandemic in the United States has hit particularly hard, resulting in widespread job loss and more than 400,000 lost lives. In the wake of this devastating health crisis, there has also been increasing demand for racial justice and very public acts of political extremism, including white supremacy and domestic terrorism.

“We must end this uncivil war that pits red against blue, rural versus urban or conservative versus liberal. We can do this if we open our souls instead of hardening our hearts….”

This tenuous state is the presidency Biden is entering, and his call for peace and harmony echo the words of Scripture he quoted.

“For his anger lasts only a moment,

but his favor lasts a lifetime!

Weeping may last through the night,

but joy comes with the morning.”

In his speech, Biden offered hope to the American people. Hope that they will move past the pandemic, beyond the economic crisis and begin to work towards repairing the things that divide so many people. The hitch? It will only happen if they work together.

“For without unity, there is no peace, only bitterness and fury, no progress, only exhausting outrage; no nation, only a state of chaos. This is our historic moment of crisis and challenge, and unity is the path forward. And we must meet this moment as the United States of America.”

Biden acknowledged the fear and anxiety so many people are feeling right now, wondering if they’ll be able to keep their job, have enough food to put on the table or enough money to pay the mortgage. To this he promised he understood and urged people not to turn inward and reject that which is different but to instead work together for a greater purpose.

The word “unity” came up several times during his inaugural address and was the focal point of his message.

“The American story depends not on any one of us, not on some of us, but on all of us. On we the people who seek a more perfect union.”

Put in a biblical context, unity is a focal point of Scripture as well, especially when talking about the Body of Christ. The Apostle Paul in Ephesians 4 advocated for his fellow believers to always be humble and gentle, leaving room for people to have faults and covering all situations in love. Verse three echoes President Biden’s words in particular, “Make every effort to keep yourselves united in the Spirit, binding yourselves together with peace.”

“With unity we can do great things, important things. We can right wrongs, we can put people to work in good jobs, we can teach our children in safe schools, we can overcome the deadly virus. We can reward work, and rebuild the middle class and make health care secure for all. We can deliver racial justice, and we can make America once again the leading force for good in the world.”

You can watch the full inaugural address here:

Making Sense of the U.S. Capitol Assault and the Christian Response

How to Make Black History Part of Your Daily Life

How to Set New Year’s Resolutions in a Pandemic

How to be Grateful When Life Sucks